We’ve been writing on the distribution density shapes expected for probability models in ROC (receiver operator characteristic) plots, double density plots, and normal/logit-normal densities frameworks. I thought I would re-approach the issue with a specific family of examples.

Any fully calibrated probability model’s performance can be characterized as follows.

By the methods of an earlier note we know the the prevalence must obey the equation:

Substituting in the known expected values for the conditional Beta distributions we have:

Which implies prevalence = a / (a + b). This prevalence is also the mean of the unconditional distribution and the unique point where the two conditional densities cross (this is confirmed by some algebra on the Beta densities).

Let’s see an instance of this example in R.

We pick an example prevalence.

This leaves us one degree of freedom remaining, let’s use this to set a to 1.4.

Confirm a / (a + b) matches the specified prevalence.

With a bit more work we can depict this graphically.

Note the conditioned curves are the densities re-scaled by to integrate to their fraction of contribution, this moves the crossing point away from the prevalence.

We can also confirm the the depicted model score is fully calibrated. We are looking for the following line to match the line y = x. 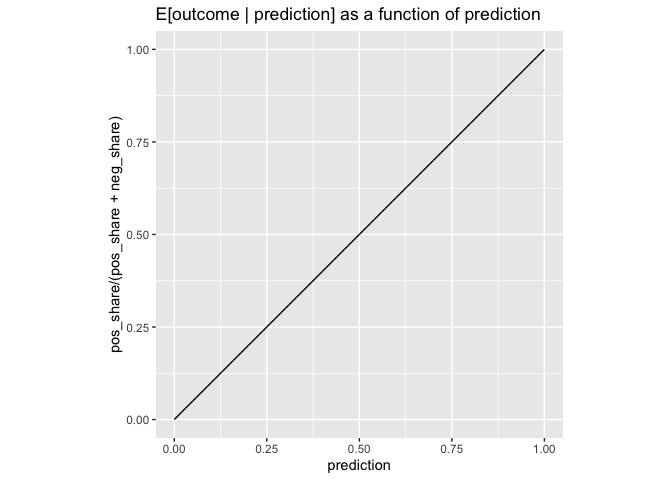 The per-class means and prevalences can be confirmed as follows.

All of the above relations can be summarized in the following annotated graph. 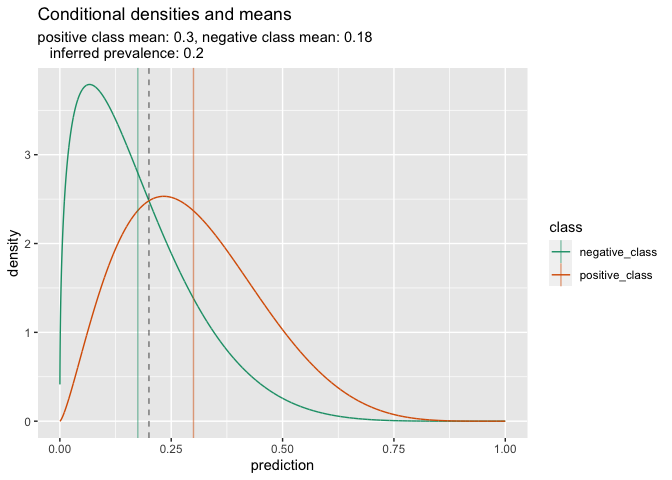 As an ROC Plot

And we can, of course, represent the model performance as an ROC plot.

For a given prevalence situation the prediction densities of all fully calibrated models that have an unconditional beta distribution are given by shape parameters:

Where (a, b) are positive numbers such that prevalence = a / (a + b) and c is an arbitrary positive constant.

For this family of model performances the limit as we take c to positive infinity is the constant model that always predicts the prevalence. This is an oblivious or uninformative model, but it is fully calibrated on its single limiting prediction.

For intermediate values of c we get models that are fully calibrated, match the observed prevalence, and have varying degrees of quality for their predictions.

If a = b, then the previously discussed uniform distribution example is part of the model family.

For a given problem prevalence, the set of fully calibrated model performance densities that have an unconditional Beta distribution form a single parameter family. When model performance is characterized by a single parameter of this nature, then using a single derived parameter such as AUC (area under the curve) becomes a proper model comparison procedure in that dominant model quality is ordered the same way as the score. (Please see ref, though this is not the model characterization family we anticipated there; also a different characterization than normal or logit normal scoring; some notes on the asymmetries in this formulation can be found here.)