One of my favorite mathematical anecdotes is the following story that Gian-Carlo Rota told about Solomon Lefschetz:

He [Solomon Lefschetz] liked to repeat, as an example of mathematical pedantry, the story of one of E. H. Moore’s visits to Princeton, when Moore started a lecture by saying, “Let a be a point and let b be a point.”

“But whey don’t you just say ‘Let a and b be points!'” asked Lefschetz.

“Because a may equal b,” answered Moore.

Lefschetz got up and left the lecture room.

But it turns out Moore was the one in the right! 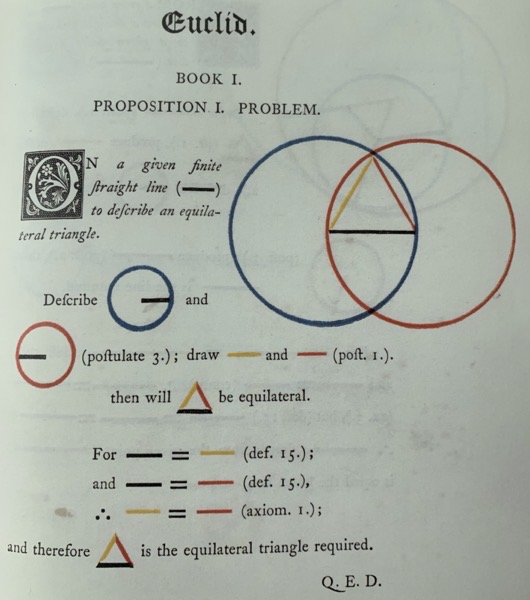 (page from Oliver Byrne’s The Elements of Euclid)

I’ve always loved this anecdote as the “Lefschetz got up and left the lecture room” ending is very much of the tone of the parables translated by Paul Reps and Nyogen Senzaki in Zen Flesh, Zen Bones, Tuttle Publishing, 1957. An enjoyable, though typically cryptic, example of the writing style is:

A traveling monk asked an old woman the road to Taizan, a popular temple supposed to give wisdom to the one who worships there. The old woman said: “Go straight ahead.” When the monk proceeded a few steps, she said to herself: “He is also a common church-goer.”

Someone told this incident to Joshu, who said: “Wait until I investigate.” The next day he went and asked the same question, and the woman gave the same answer.

Joshu remarked: “I have investigated that old woman.”

I’ve always liked the form, how it sets up stereotype narration and then violates expectations so quickly. Even imitations of it are quite enjoyable. For example the classic rec.humor.funny “AI Koans”:

A famous Lisp Hacker noticed an Undergraduate sitting in front of a Xerox 1108, trying to edit a complex Klone network via a browser. Wanting to help, the Hacker clicked one of the nodes in the network with the mouse, and asked, “what do you see?”

Very earnestly, the Undergraduate replied “I see a cursor.”

The Hacker then quickly pressed the boot toggle at the back of the keyboard, while simultaneously hitting the Undergraduate over the head with a thick Interlisp Manual.

The Undergraduate was then Enlightened.

Now back to the issue of Lefschetz versus Moore. With longer description allowing us to set a bit more context, the story changes.

In the winter of 1898-1899 the mathematician David Hilbert gave a series of lectures on Euclidian geometry. The material was collected into a book titled The Foundations of Geometry. The work was self described as:

… a new attempt to choose for geometry a simple and complete set of independent axioms and to deduce from those the most important geometrical theorems in such a manner as to bring out as clearly as possible the significance of the different groups of axioms and the scope of the conclusion to be derived from the individual axioms.

Laws of geometry were collected in the West as early as 300 BC, as Euclid’s The Elements. These were already so refined when collected that they are thought to be documentation of an already well established set of schools. There were already very many deep analyses of and commentaries on The Elements. Making a new and significant contribution is a rare achievement.

Hilbert’s reformulation was such an accomplishment. “Since its appearance in 1899 Hilbert’s work on The Foundations of Geometry has had a wider circulation than any other modern essay in the realms of pure mathematics.” (Oswald Veblen, “Hilbert’s Foundations of Geometry”). What is currently taught as “Synthetic Geometry” is often not in fact the axioms collected in Euclid’s The Elements, but something derived from a reformulation by Hilbert (1898), Birkhoff (1932), Tarski (1959), or committee (ref). This is a long way of saying: Hilbert’s The Foundations of Geometry had germinal impact. So many details of it, good or bad, influenced mathematics for decades.

Though not everyone was ready to abandon Euclid: “… no mathematician worth of the name can afford to not know Euclid, the real Euclid as distinct from any revised or rewritten versions which will serve for schoolboys or engineers” (Preface, Thomas L. Heath, The Thirteen Books of Euclid’s Elements 1908).

One particular detail of Hilbert’s work was an unfortunate, and unstated, convention that objects were understood to be distinct, unless stated otherwise. Under this (ugly) convention, Lefschetz’s statement is not pedantry, but actually required to avoid confusion. Requiring constructions of this form is in fact one of the reasons a fragile convention that “points” are always understood be distinct is undesirable.

Hilbert’s The Foundations of Geometry is full of statements of the following form:

Notice this statement is in fact false if A = B. As Hilbert’s The Foundations of Geometry is not considered to be a deeply flawed work, it must be that there is a reading convention that implies “two points, A, B” is to be read as “two [distinct] points, A, B.”

An odd thing: axiom I, 5. is on the third page of my English translation of Hilbert (E. J. Townsend, 1902). There is no discussion of any such convention prior to axiom I, 5.. All axioms prior to axiom I, 5. do use the word “distinct” as in “I, 1. Two distinct points A and B always completely determine a straight line a. …”, or statements that imply distinct (such as “not situated in the same straight line”). Axioms after axiom I, 5. tend not to explicitly establish distinctness, which I find especially troubling in the “axioms of order”. For an example, please try to carefully and critically read the following both with and without the distinctness convention.

II, 3. Of any three points situated on a straight line, there is always one and only one which lies between the other two.

I don’t know if this distinction is obvious to German speakers, I don’t feel it is quite obvious in current colloquial American English. The original Euclidian definitions, postulates, and propositions don’t seem to run into the above issues, as many of these early statements are couched in terms of proving equality among assumed entities. Heath’s translation of Euclid does have some interesting commentary on page 195 (Postulate 1) on the use of “any” in English versus “every” in Greek.

I don’t think this problem was introduced in translation, as the distinct point convention appears to be a feature of at least one German edition:

I 6. Wenn zwei Punkte A, B einer Geraden a in einer Ebene α liegen, so liegt jeder Punkt von a in der Ebene α.

(Notice the absence of any phrase such as “voneinander verschiedene”; also note this edition has a different number of axioms than the English translation, hence a different axiom number.)

I’ll end with a koan that exposes a few disturbing sides of teaching and technical work.

61. Gudo and the Emperor

The emperor Goyozei was studying Zen under Gudo. He inquired: “In Zen this very mind is Buddha. Is this correct?”

Gudo answered: “If I say yes, you will think that you understand without understanding. If I say no, I would be contradicting a fact which many understand quite well.”