What is “Genetic Art?”

What is “genetic art?” My answer to this is https://www.geneticart.org (redirects to https://johnmount.github.io/mzlabs/GeneticArt/), but this requires some explanation.
The quick answer is this is genetic art:

The longer answer is that a number of times different forms of algorithmic art have been invented. Algorithmic art is art generated by mathematical procedures. Such art is similar to earlier mechanical and kinetic art forms. One branch of mathematics often used to generate such art is called “fractals.” We looked somewhere else for our inspiration (our art is not strictly fractal in nature). What we worked on we called “genetic art” to emphasize the role of encoding and re-combination in the works.

In the early 90’s Karl Sims presented a number of art installations based on at least three interesting ideas:

The part that caught a number of people’s imaginations was the evolution aspect. Karl Sims defined a method of combining transformations of original source images. He then allowed people to manipulate his art installations and “vote” on art they liked best. The more popular pieces were combined (or bred) to create newer works that then put up against criticism. After many breedings (or generations) the combinations of transforms were quite complicated and a number of unexpected images were created.

Figures of this era looked much like this (well better than this, this comes from a scan of a black and white printing of the paper):

Scott Neal Reilly built a new, more simplified system; and with Michael Witbrock put the whole thing on the Web. This was an unimaginably primitive time on the Web. Cutting edge interaction was sites like “Blue Dog Can Count.” The Mac had no forms capable browser and Amazon.com was still a year away from launching. An interactive art exhibition running directly on the Web (and manipulated by anybody) was a significant step forward.

Michael Witbrock was influenced by the stories of Heikegani Crabs and Alan Turing’s 1952 paper “The Chemical Basis of Morphogenesis” (which theorized how simple systems could develop textures).

At this point I (John Mount) got interested in the project and felt that much more could be done with how such systems handled color. The art had been simplified to primitive elements that one could think of as brushes (really more like gradients) but the art was essentially grey-scale with a false-color map applied at the last step. Karl Sims had made transformations on images his primitive operations, I wanted my primitive operation to be transformations on color.

Being a math-nerd I chose to encode color inside a mathematical system called “Quaternions” (see Ebbinghaus et al. Numbers Springer-Verlag, Second Edition, 1988). Colors are often represented as three brightness terms- for example intensity of red, intensity of green and intensity of blue. The Quaternions were discovered by Sir William Rowan Hamilton in 1843 (see Wikipeida: Quaterion). Sir Hamilton was trying to solve the problem of encoding positions in space in a nice structure and was so excited by his discovery he carved his fundamental formula for them in the Brougham Bridge the night he had his breakthrough. Quaternions are represented as four standard numbers (so they have enough “slots” to encode a position in Sir Hamilton’s case or in our case a color) and they their selves behave a lot like individual numbers. There are rules for adding, subtracting, multiplying and even dividing Quaterions. This means you can write formulas over them and these formulas are now directly manipulating colors (instead of manipulating geometry or intensities as in the earlier systems).

So, as with Neal Reilly’s system, we represented all of our transformations as formulas and represented “breeding” as ripping a bit of one formula out and combining it with another. For instance these two rather uninteresting color gradients were represented by the formulas:

One of our arithmetic operations was named “mod” and we could use it to combine the two items into a more complicated formula and somewhat more interesting picture:

After enough generations of selection and breeding the formulas get long and complicated (luckily nobody but the machines have to look at them) and the pictures get interesting:

Michael Witbrock and Scott Neal Reilly supplied an updated web interface. And at this point we got our 15 minutes of fame: 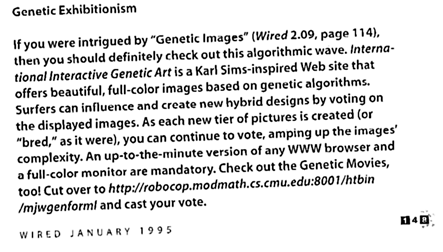 We also made large prints (using a parallel computation system named “WAX” by Peter Stout) and set up an exhibition in a Pittsburgh coffee house. The development work was largely done on a machine with a black and white monitor (later we got access to a grey scale monitor) so it really was a treat that color was able to fend for itself.

On an unrelated track in 1991 another CMU student, Scott Draves, was pursuing a serious project and building art based on iterated function systems (more related to fractals than our work) and in 1999 added some genetic ideas and released the Electronic Sheep client/server oriented screen saver (inspired by SETI@home).

Recently we have gotten back to some more of Sims’ ideas and allowed more geometric transformations and real source images, such as incorporating some of Dover’s royalty free Japanese textile designs: 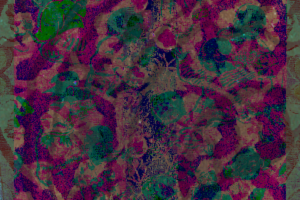 The original system was group interactive and an incredible hit (and had its own Zephyr discussion instance- the then equivalent of Twitter). The current demo is stand alone and server-free, so it is a single player game.

All the user has to do is point a Java 1.4 (or better) capable browser at: Genetic Art Program. Click (and hold) on the “Action Menu” of any of the sub-windows and select “take over left selection” on one picture that interests you and “take over right selection” on another picture that interests you. You will notice doing this copies the pictures to the left and right of the “breed pictures” button. Now press “breed pictures” as many times as you want. Each time you press it you will get a new picture build by combining elements of the two small pictures. At any time you can have some other picture you like take over a breeding position (again by using its action menu). And you can also scroll the strip of five pictures around and click on them to introduce previous favorites from the earlier server version of the program into your space of opportunities.

We were originally a bit uncomfortable calling the work “Art” but a number of the images have made significant impressions on us and others- so perhaps it qualifies.